Helping birds remain resilient in the face of multipke threats

The San Francisco Bay is home to a diverse range of plant and animal species. It nurtures fish populations and colonially-nesting waterbirds, is a significant wintering area for waterfowl, and is recognized as a site of hemispheric importance for migratory shorebirds. Its wetlands serve as important flood control buffers between bay waters and upland territories, and the surrounding riparian, grassland, and upland habitats are equally important, supporting numerous plants and animals, as well as hundreds of passerine, raptor, and other local and migratory landbird species.

However, Bay Area birds live in a rapidly changing landscape. The San Francisco Bay Area is one of the most heavily developed estuaries in the world, with nearly eight million people living on its shores, placing unprecedented pressures on the region’s biological resources, goods, and services. Over the last 150 years, an estimated 90% of historic tidal marsh has been eliminated through development or conversion to salt evaporation ponds and agricultural fields. The surrounding grassland, riparian, and other habitat types have also been eliminated due to human development. In addition, climate change and pollution increasingly press on the area’s natural ecosystems. ​

All of this change has had consequences to our local bird populations, and to birds around the globe. According to the International Union for Conservation of Nature (IUCN), one in every five bird species could be extinct in the next 50-80 years. The Bay Area, an internationally important region for birds, is also heading toward increased loss. All of this is occurring during an era of shrinking government budgets dedicated to environmental protection. But SFBBO and our partners are working to build bird populations' resilience in the face of these changes and with the help of our donors and volunteers we're creating a powerful impact.  ​
​Learn more about the specific issues birds face: 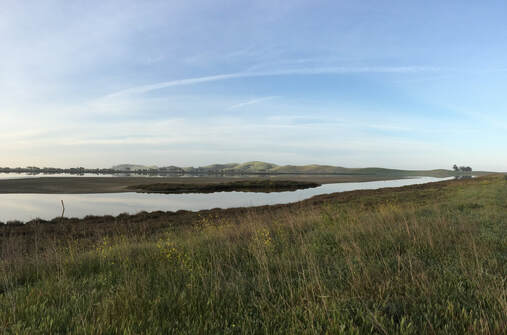 The San Francisco Bay is a vibrant estuary that is important to millions of birds that live, winter, or migrate through our region. It is also home to eight million humans who live and work around its shores. The biggest threat to these bird populations is habitat loss. In the Bay Area, an estimated 90 percent of historic tidal marsh has been eliminated. Riparian and seasonal wetlands, grasslands, and other natural habitats have also been lost due to human activity.

Human activity, such as agriculture, controlled burns, and development, has removed tidal marshes, degraded shorelines, and impacted riparian and upland habitats. Grass prairie habitat in the U.S. has declined by more than 95 percent during the last century. In addition to a loss in habitat types is an increase in the fragmentation of remaining habitats, which can functionally reduce habitat accessibility or make navigation difficult between critical resources, such as food and resting areas. ​

​Loss of habitat leads to diminishing resources, such as food, for birds, which in turn can create greater competition for resources and result in smaller populations. Reductions in population size negatively impact genetic diversity, and decrease the resilience of a species to other environmental changes. Human interventions are needed to help balance out these effects and SFBBO is working with our partners to develop innovative solutions.

Our recent projects include our tidal marsh restoration work near Alviso and Redwood City; and Snowy Plover habitat enhancements in Hayward. With the help of our volunteers, donors, and partners, we work to increase the health of these ecosystems for birds, and for the other wildlife and human communities that rely on them. Through these initiatives we not only create habitat solutions through our own efforts but, even more importantly, we share what we've learned with other organizations who use it to revitalize exponentially more habitat around the Bay Area and beyond. 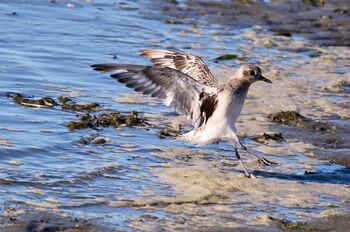 Recently, the U.N. Intergovernmental Panel on Climate Change released a report (Report) predicting global impacts due to climate change. These include increased droughts, extreme storms, and fires; numerous wildfire species extinctions; and a 2-foot or more rise in sea levels over the next 100 years. All of these phenomena can negatively impact birds, eliminating bird habitat and green corridors; reducing water and food sources; and disrupting the timing of breeding and migration.

​In addition, a recent study (Study) published by the Audubon Society shared  that almost half the bird species found in North America--including song birds, raptors, waterbirds, hummingbirds, gulls, and ducks--are under threat as climate change reduces their ranges by more than half by 2050.

Our Bay Area birds will be among those most severely hit. Brown Pelicans, which were near extinction in the 1970s from DDT poisoning, are under threat as climate change affects ocean conditions in their Mexican summer nesting grounds. Hotter and drier conditions locally are reducing the abundance of prey (such as rodents) that Golden Eagles depend on, and Bald Eagles are on a trajectory to lose almost 75 percent of their breeding range.
​
American Avocets, Yellow-billed Magpies, Black Oystercatchers, Marbled Godwits, American Kestrels, Swainson's Hawks, Northern Harriers, Snowy Plovers, Burrowing Owls, Snowy Egrets, and Willets are also at risk, and endangered species such as Least Terns and Ridgeway's Rails are particularly imperiled. ​​In addition, reductions in these and other bird species will have wide-ranging effects on entire ecosystems as their roles as insect eaters, pollinators, and seed dispensers are impacted.

We are working with our partners to mitigate these impacts in the Bay Area. We are restoring Snowy Plover, and tidal marsh habitats and sharing what we've learned with other groups who are restoring habitats in other regions. We collect data on Bay Area bird populations and share it with resource managers so they can make decisions on how to allocate support and space that conserve the most vulnerable species. We collaborate with partners on region-wide conservation efforts such as the South Bay Salt Pond Restoration Project (Visit website). And we provide community science and environmental education experiences that help the public care about birds and better understand their ecosystems and the threats they face. 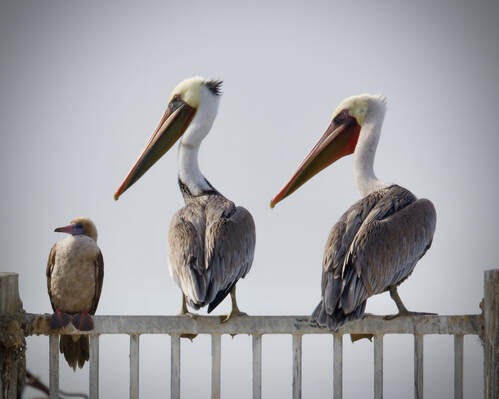 Birds face a wide variety of threats and need our help. In addition to habitat loss and climate change, Bay Area birds face numerous other issues and threats. These include pollution and pesticides; fire and controlled burning regimes; invasive species; collisions; entanglement and entrapment; predation; disease; and illegal trade in wildlife. ​Understanding these threats to birds can lead to effective solutions, and increased appreciation for birds can lead to action.

Our avian research and habitat restoration programs focus directly on some of these issues:
We also partner with agencies and organizations such as the
Pollution/Pesticides
At least five billion pounds of pesticides are manufactured globally each year and 20 percent is used in the U.S. and Europe. These poisons damage bird populations from concentrated doses; bioaccumulation (where pesticide levels become more concentrated with each step in the food chain); hormonal effects; and fewer or weaker eggs. Pesticides also destroy prey and damage plants that birds depend on. Rodenticides are also an issue, especially for raptor species. ​​​Birds are also impacted by air pollution and water pollution, including oil spills.

Fire
Wildfires, like the ones we experienced in the North Bay and throughout the state and country in 2017, can impact bird populations. Sometimes fires, such as prescribed burns, can help birds by increasing grassland habitat. But for other species such as the Greater Sage-grouse, firs can allow invasive species to take hold and crowd out the native plants birds rely on. They also destroy habitat and pollute air and water.

Invasive Species
Invasive plant species can replace the native plants birds need for food, shelter, and nesting; may cause declines in the insects bird species depend on; and can even be toxic. Invasive insects like red fire ants can also be dangerous to ground-nesting birds, and invasive species such as the red fox can put intense pressure on native bird survival. Invasive birds can displace native birds in dwindling nesting habitat, and can bring parasites and exotic diseases such as the West Nile virus. ​​

Collisions
An increase in human development means an increase in the number of barriers and obstructions in areas where birds fly, leading to more and more bird collisions with man-made structures. Recent studies estimate there are about 2.8 billion bird collisions annually in the U.S. Some of the factors that contribute to collisions include infrastructure height, reflective windows, lighting, weather, location, and bird vision and health. Birds also collide with other human designed objects such as cars and energy infrastructure. ​​

Entanglement/Entrapment
​​Many sources contribute to entrapment of birds, including oil, tar, and brine pits; evaporation ponds; tanks, tubs, and other open containers; oil spills; garbage (such as soda can plastic rings), and fishing nets. After becoming trapped, birds drown, starve, experience cold and heat stress, or asphyxiate. The also die while trapped from ingesting toxins, becoming sick, or being eaten by predators.

​Predation
Like most wild species, birds are impacted by predators. In nature, the relationship between prey and predator can usually find a balance. But urban environments like the Bay Area can create an imbalance that threatens certain bird species. For instance, many gull and corvid species like to eat human food and garbage readily available in urban environments, which helps their populations grow. They also like to eat Snowy Plovers, Least Terns, and other sensitive species. This puts these more sensitive species at greater risk. Predation

Disease
Diseases such as avian botulism, avian influenza, avian cholera, and West Nile virus have affected North American migratory birds for many decades. This is because, while healthy bird populations are resistant to infectious diseases, when bird populations are stressed by all of the impacts mentioned above they become more vulnerable to disease.

Illegal Trade in Wildlife
Wildlife trafficking is thought to be the third most profitable illicit trade in the world after drugs and weapons, worth an estimated $10 billion a year, and birds are the most common contraband. The U.S. State Department estimates that two million to five million wild birds are traded illegally worldwide every year. Individual birds are damaged when taken from their native habitat; they can spread diseases and parasites; and their loss is felt in the bird populations left behind. ​​​
Photo credits: Forster's Tern - Chuq Von Rospach; Tidal Marsh - Cat Burns; Black-bellied Plover - Jean Halford; Red-footed Booby Pretending to Be a Pelican - Humor - Elizabeth Van Dyke